The financing is flowing — but only from a few well-funded lenders (yes, Bank of the Ozarks is one) 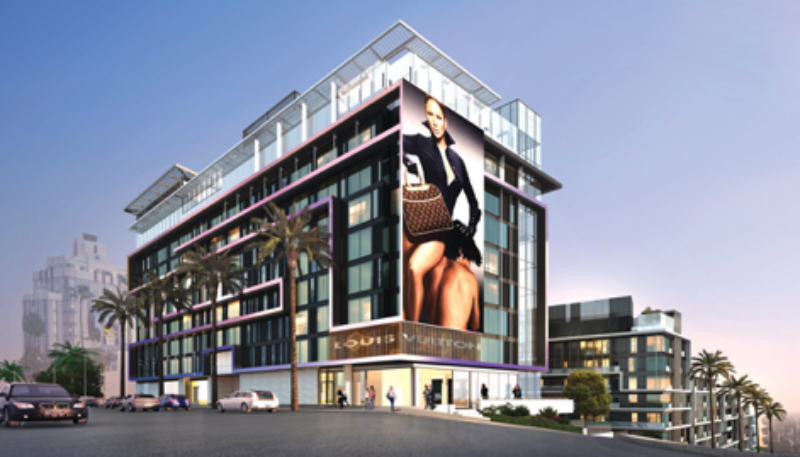 In Los Angeles as of late, it seems the cash spigots have been turned on for several large-scale developments.

Huge construction loans have flowed in recent months to high-profile apartment, hotel and retail deals — some planned for years — from North Hollywood to downtown to Marina del Rey.

But scratch the surface, and a more nuanced picture of the lending market emerges. The Real Deal’s ranking of the county’s top construction loans found that it’s just a handful of lenders that account for most of the activity. As market conditions have become less favorable and some fairly recent financial regulations limit risk, the pool of loan sources has shrunk, those in the industry say.

“In today’s market, construction lending is difficult, and every year it gets more and more difficult,” said Bryan Shaffer, a principal of George Smith Partners, an L.A.-based capital advisory firm. “For most banks, it doesn’t make sense anymore.” Lenders are likely stingier now, knowing the recent boom is winding down, said Paul Habibi, a teacher at the UCLA Anderson School of Management and a principal at Habibi Properties, a large residential landlord.

“As construction lenders perceive it, when you get in bed with a developer, you are looking at a two-year commitment. So you will have two years to get out from under that commitment,” he said.

“And we are relatively late in the real estate cycle. It’s why some economists think 2019 will be a cloudy year,” he added.

Zeroing in on transactions from 2017, TRD also ranked the largest construction lenders in L.A. County across commercial development categories, though most of the transactions involved new apartment buildings. 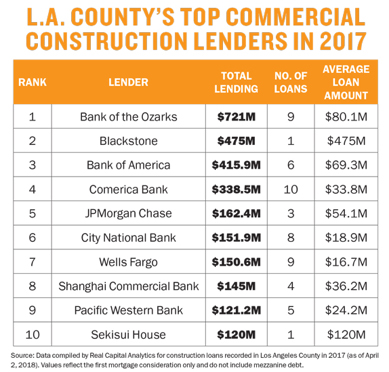 The biggest lender — which won’t come as a surprise to anybody who has followed its aggressive moves in recent years — is Bank of the Ozarks, from Little Rock, Arkansas. It issued about $721 million in construction financing in L.A. County in 2017, at an average of $80 million a pop.

And five of the 10 largest construction loans in L.A. originated with the bank, which in the last four decades — through a chain of acquisitions — has swelled from a community bank to a national player with $21 billion in assets in 2017.

The largest single loan in the Ozarks portfolio last year was a $205 million issue to Sunset Time, a hotel-condo project on Sunset Boulevard in West Hollywood that broke ground last year and is scheduled to open in 2019.

Developed by Combined Properties, a Washington, D.C., firm, and AECOM Capital, the project will offer 149 hotel rooms and 40 condos in a row of buildings with staggered heights that together resemble steps.

Spokespeople for both Combined and AECOM said it was premature to discuss the project, which plans to begin marketing later this spring. Bank of the Ozarks did not respond to requests for comment.

If the construction loan market has tightened, the Sunset Time project embodies the kind of deal that still does get done, some brokers say.

Because of its deep pockets, Ozarks can satisfy tough Dodd-Frank financial rules that require lenders to have capital reserves covering the entirety of their loans to protect against financial collapses, like in the last recession. That might mean having, say, $100 million on hand to cover a $100 million loan, even if the loan is released in stages, as construction loans usually are, Shaffer said.

In the pre-Dodd-Frank days, lenders usually only held reserves for the amount of the specific stage, Shaffer said.

Those regulations, some of which went into full effect as recently as 2015, have had a chilling effect on smaller banks, which has strained the construction lending business overall, brokers say.

When loans are available, they are often nonrecourse loans — those that allow the lender to go after just the property in the case of a default but not after other assets. These loans usually carry higher interest rates and require low loan-to-value ratios. Ozarks, for one, specializes in loans of this type.

Naturally, well-capitalized developers are able to play in a market where money costs more. Combined Properties, which has developed $1 billion in properties since the mid-1980s and has another $1 billion in its pipeline, according to the company, is the type that can weather the current climate, brokers said.

That climate also seems to favor hotel and apartment projects over office development, in a city where the office vacancy rate was 15.4 percent in the fourth quarter of last year versus 14.4 percent in the year-ago quarter, according to Cushman & Wakefield figures. But even Ozarks, which is known for having a stomach for risk, seems to be making relatively conservative moves, like with Park Fifth, a mixed-use development in Downtown L.A. Developed by MacFarlane Partners, the project — on Pershing Square Park — scored a $103 million construction loan from the bank in May 2017. It was seventh largest loan last year.

MacFarlane, a 30-year-old investment manager with a development arm, was also issued another $80 million from the bank for the same project in 2016, which wasn’t included in TRD’s survey.

For that loan, Ozarks said it would cover only about half the development total for the $335 million project, said Dirk Hallemeier, a managing director of MacFarlane. The project also benefited from a $60 million mezzanine loan through the EB-5 program, which grants green cards to foreign investors in exchange for their financial support for job-creating projects.

“The lenders are being very cautious, let me put it that way,” Hallemeier said. With Ozarks, “the pricing is a little higher, and you have to meet their expectations in terms of liquidity and coverage and those kinds of things, but they set their loans up to be relatively secure,” Hallemeier said. Ozarks also typically asks for large down payments, according to news reports.

Park Fifth, which will open in 2019, consists of a high-rise with 347 one- and two-bedroom rental units and a mid-rise building with 313 units in a complex that will also offer shops.

The project, which is rising from a site cleared in the ’80s by developer David Houk for a hotel-and-office complex that never came to pass, is the latest example of a long-planned project that lenders seem to be giving another look.

Downtown, which has enjoyed a population spike in the last decade, is the kind of walkable, densely settled area that some L.A. lenders believe is good bet, even if some projects there, like the Bloc, are struggling.

Another neighborhood that seems to fit that bill is North Hollywood, or NoHo, an area well served by subways and buses. Rising there is NoHo L&O, a mixed-use property with 297 studio to two-bedrooms, plus a 26,000-square foot Whole Foods grocery store. “There’s nothing really like it over there,” said Jeff Cairney, a director of New York-based Camden Securities Company, the project’s lead developer. Joining it are Hayes Capital Management and Canyon Partners Real Estate, both of California.

The project, which broke ground last year and is set to open in 2019, scored a loan of $70.5 million from Ozarks, good for a 10th-place finish on TRD’s list.

Though Ozarks has aggressively pushed into L.A., it remains to be seen if the effort will continue, brokers said. Last summer, Dan Thomas, the head of the bank’s real estate group, abruptly left the publicly traded company, causing its stock price to plunge.

Meanwhile, traditional banks are also still kicking in the market. Bank of America was responsible for two deals in the top 10 and was the third-largest construction lender in L.A. last year, with $416 million across six loans, according to TRD’s ranking.

The Blackstone Group, for one, was the second-biggest lender in L.A. County last year, with $475 million in issuances, though in just a single deal.

The loan was for Row DTLA, the massive redevelopment of the former Los Angeles Terminal Market, a 1923 produce complex near downtown. With seven buildings and 1.3 million square feet, Row DTLA is being built by a partnership of Atlas Capital Group and Square Mile Capital with funding from HOOPP, a Canadian pension fund.

An earlier plan from Evoq Properties to redevelop the concrete buildings that line the site, called Alameda Square, did not come to fruition despite a $78 million loan in 2013. The loan, from a firm called Olen Properties, was for renovations, Evoq principals said. Those principals suggested in interviews at the time that the unconventional mix of tenants at the site — startups and garment manufacturers — meant loans from traditional banks would have been difficult.

Atlas and Square Mile picked up the sprawling 32-acre property for $357 million from Evoq in 2014. Representatives for the project, and Blackstone, were unavailable or declined to comment.

But as prices rose, “they got into the lending business instead, which allows them to manage returns better,” Hirt said. Private equity firms will also generally offer nonrecourse loans, for high fees.

“It’s a very sought-after and easy-to-finance asset class,” said Hirt, who added that borrowers with those kinds of projects often don’t even have to lock in an anchor
tenant first.

Going forward, Hirt is keeping an eye on macroeconomic events. The federal tax law passed in 2017 is one to watch, though most attorneys and analysts have so far issued no serious guidance about how it will impact construction lending.

New tariffs, though, could hike steel prices, though Canada, a source of a lot of U.S. steel, has been exempted. “But we just don’t know yet,” Hirt said.

In the meantime, many developers seem bullish on the chances of locking in loans for developments in L.A. — even as other markets soften — as the city embraces the types of urban-core projects other metro areas jumped on long ago.

“L.A. has always been a world-class city, but the sidewalks rolled up after 5 p.m.” Hallemeier said. “Now it has crossed the tipping point.”