Since the end of the financial crisis, Midtown South has been one of the fastest growing sub-markets in Manhattan due to the large influx of Technology, Advertising, Media, and Information (TAMI) tenants migrating to the market. Silicon Alley, New York’s version of Silicon Valley, is the area just north of Union Square renown for its concentration of TAMI tenants. As tenants continue to relocate to Midtown South, Silicon Alley continues to grow. There has been a 75.5% increase in tech jobs from 2001 to 2015. In fact, the overall tech industry accounts for more than 291,000 jobs and produces more than $124.7 billion in economic output according to New York City’s Economic Development Corporation. Venture capital funding for tech has begun to taper due to growing economic and political uncertainty causing funding to focus on later stage tech companies, many of which are located in the Midtown South market.(1) 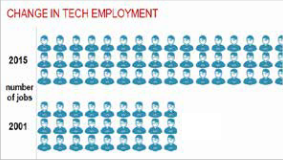 Office leasing activity in the area has gained momentum in the first quarter of 2017, reaching pre-recession levels of 1.32 million square feet. Developers have delivered more than 600,000 square feet of new development to the submarket’s inventory, causing net absorption of -16,000 square feet. The predominant Midtown South office inventory tends to be located in pre-war buildings, often with loft or open-space features, a hodge-podge of HVAC systems and less than optimal power/connectivity. As such, the submarket should quickly absorb the abundant amount of space coming online within the next few quarters as the demand for Class A or B “technologically sufficient” space grows.(2)

Union Square has managed to capture more than 50% of all Manhattan tech leasing for the sixth consecutive year, according to Colliers International. Most notably, WeWork has signed three leases in the area with the capacity to host almost 3,000 co- working members. IBM signed a landmark membership deal for the entire WeWork building at 88 University, a transaction financed by Mission Capital in 2016. The co-working space is roughly 70,000 SF across 8 floors and will support nearly 600 IBM employees.

In combination with the private sector, local government support from Mayor Bill de Blasio has also played a crucial role towards the explosive growth of the Midtown South submarket, as the city has committed $250 million towards a new hub to support the area’s thriving tech and innovative start-up scene. The anchor tenant to the project will be Civic Hall and will include a collaborative work and event space that will be used for the advancement of technology for the public. The facility is estimated to create 600 tech jobs and host digital trainings for thousands of New Yorkers.(1)

Midtown South is the top performing market in Manhattan for condo sales in Q1 2017 by median price and average price per square foot; however, overall performance still trails previous years. In the first quarter, Midtown South closed 913 sales with a median price of $1.6M and an average price of $2,340 PSF. There were 1,788 new condos that came online, a 25% increase from last year. The 4% decrease in number of condo sales coupled with the increase of inventory from last year has increased supply and average time on the market. Although the average number of days on the market (98 days) increased, Midtown South is still the most competitive location for buyers as it has the best absorption rate of any submarket in Manhattan.(3) Mission successful executed condo construction loans for Walker Tower and 10 Sullivan Street. At the time, Walker Tower Penthouse was the most expensive condo sold in Midtown South for $50.9 million. 10 Sullivan was the tallest condo building in SoHo and is a landmark building known for its unique design and excellent location.

“In the last few years there has been a lot of renovation and new construction… While the expansion of Manhattan’s tech industry is responsible for much of the gain, newer and updated product has also driven rents higher.” – Tristan Ashby, JLL director of New York Research

“What you’re seeing is just a more diversified market… The future of the world is everything is going to have a tech component. There’s a premium people are willing to pay to be there.”
– Mike Mathias, a leasing broker with Savills Studley Inc.

“A sign of a healthy city is activity in strong growth industries — and New York’s tech industry is certainly alive, well and growing in Union Square. With the area’s unrivaled transportation access and its vibrant mix of shops, restaurants, fitness studios and other amenities around Union Square Park, the district holds a lot of appeal for individuals who work in tech and creative industries… As Union Square’s community of tech, advertising, media and information companies has continued to grow, the district is leading the way in driving 21st-century job creation for New Yorkers.” – Jennifer Falk, executive director of the Union Square Partnership Business Improvement District.

“There are 60,000 people a day who cross Madison Square Park. I think that the renaissance of the park has been significant to this neighborhood.” – Brooke Kamin Rapaport, the senior curator at the Madison Square Park Conservancy

“Since its beginning, Union Square has offered New Yorkers a crossroads not only for transportation, culture, business and health but also for political discourse and free speech… Now with the planned new Civic Hall, Union Square will be able to also offer every New Yorker, regardless of background, gender, age, race or physical ability, access to digital skills, jobs and a renewed sense of civic engagement in the 21st century.”
– Andrew Rasiej, founder and C.E.O. of Civic Hall.