Property is in the final stages of significant capital improvements campaign.

MIAMI (Jan. 27, 2019) — Mission Capital Advisors announced that its Debt and Equity Finance Group has arranged a $26-million, non-recourse bridge loan for 44 West Flagler Street, a 164,000-square-foot office building in downtown Miami, Florida. The Mission Capital team of Jeff Granowitz, Ari Hirt and Daniel Azizi represented property owner Brickman in securing the floating-rate financing from a mortgage REIT. The transaction closed on December 20. After acquiring the property in 2016, Brickman implemented significant capital improvements to the 26-story building, including large-scale renovations to the building’s entranceway, lobby and building systems, and the addition of tenant amenities, including a conference facility and a fitness center. With renovations now substantially complete, the building has been transformed into one of the most attractive commercial properties in its class. 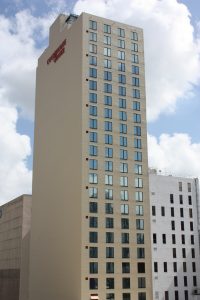 “Brickman is well-regarded across the country as a strategic investor with the ability to add value to existing office assets,” said Hirt. “There is appetite in the capital markets for transitional assets with strong sponsorship, and Brickman’s stellar reputation across the industry was instrumental in our ability to attract lender interest.” With its location in downtown Miami, the property is conveniently located near various mass transit options, and is within walking distance of MBTA, Metromover and Brightline Railway stops. The property is also less than one mile from Miami World Center, an under-construction mega-development which will include 300,000 square feet of retail space, 500,000 square feet of office space, several acres of open space, and a Marriott Marquis World Convention Center Hotel with 1,800 rooms and 600,000 square foot of convention space.

“Brickman has done an incredible job of refashioning this office building into a best-in-class commercial facility, and the success of the capital improvements campaign was a key part of the successful execution of this deal,” added Azizi. “While we were dealing with a compressed timeframe to ensure that the deal closed by year-end, we cast our net to a wide range of lenders, and ultimately had both banks and non-bank lenders bidding on it. The interest we generated translated into several very strong offers, and we were able to lock in this floating-rate deal with strong leverage and extremely competitive pricing.” Brickman is a leading New York-based real investor and operator that has owned, operated, leased and asset-managed more than 8.6 million square feet of office property. The firm’s current office portfolio of 2.3 million square feet includes properties in eight markets across the United States.