The site of the Mission Gateway mixed-used development at Johnson Drive and Roe hasn’t had much construction activity in the past few weeks — and it’s raised some questions from Mission residents. 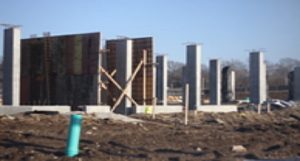 Developers say the lack of activity has been on account of the cold as well as the ice and snow from winter storms. Besides that, GFI, the development partner working with Cameron Group LLC lead Tom Valenti on the project, has two other major projects in the Kansas City area and only has so much personnel to go around.

However, Andy Ashwal with GFI said the project is actually ahead of construction schedule, even though they’ve only had seven to 10 productive work days in the past six weeks. GFI has employed staff to make the most out each of those work days in order to stay on track and exceed the schedule.

But what’s more “exciting” for the development as a whole is the developers in early December signed on a 90,000-square-foot retail entertainment tenant, which will go alongside the 40,000-square-foot food hall that will be curated by chef Tom Colicchio. The new developments have “caused us to shift the business plan.” Ashwal said the developers plan to speed up construction to match the needs of the entertainment tenant.

Valenti said the name of that tenant will be announced “soon,” which could mean the next month.

Ashwal said developers expect to complete construction and fully activate the site in the first half of 2021. The last piece of the development to be completed will be the 200-key hotel component.

Additionally, the following components will come into place:

5,000-square-foot office building to be complete in the fourth quarter of 2020