As co-living companies race to open projects in New York, the options for renters are multiplying. 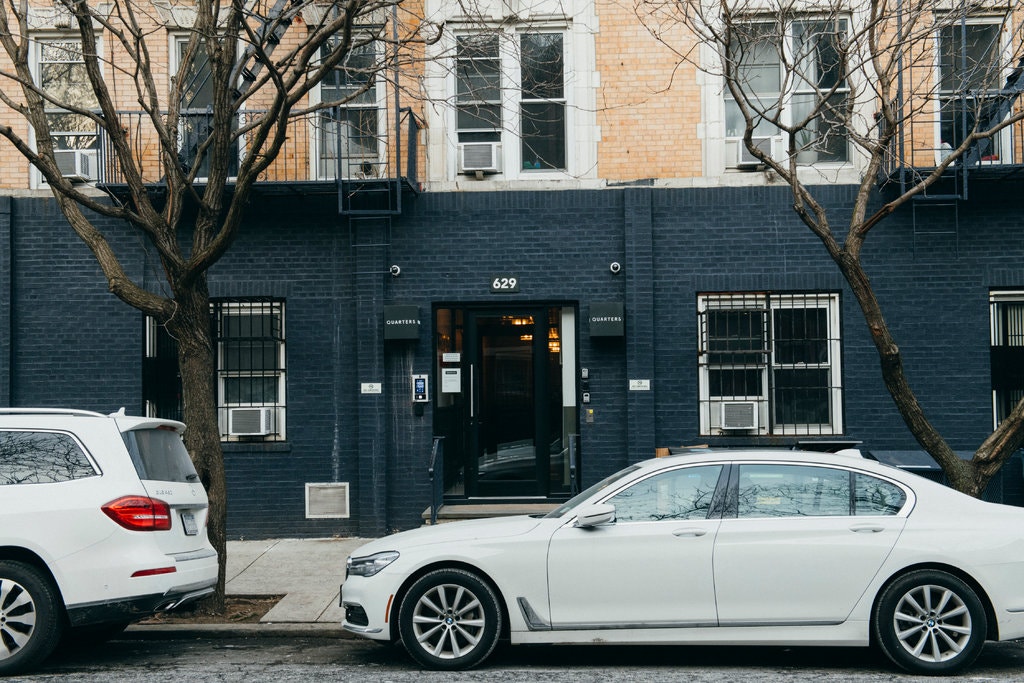 New Yorkers have long shared apartments in order to afford the city’s famously high rents. This, of course, often entails hunting down an apartment with a real estate agent — and paying a broker’s fee, plus a hefty deposit — then furnishing the place, lining up roommates and getting electricity and internet service up and running.

For several years, co-living companies have been popping up, providing a fast, streamlined alternative in the form of fully furnished, move-in-ready rooms in shared apartments.

Lately the trickle of co-living activity has become a torrent.

Homegrown companies are expanding into new neighborhoods. Brands that have built up their businesses elsewhere are planting their flags here. And even traditional real estate companies are getting into the act.

“No one wants to be left behind,” said Matthew Polci, a managing director at Mission Capital Advisors, which has been financing an increasing number of co-living projects.

With so many in the pipeline, Brad Hargreaves, chief executive of the Brooklyn-born co-living company Common, predicts that the number of co-living rooms in the New York today — over 25,000, by some estimates — is a “fraction of a fraction of what it will be.” His own company, which he founded in 2015 and now operates in six cities, has 520 rooms in 20 buildings in New York alone, and more on the way. 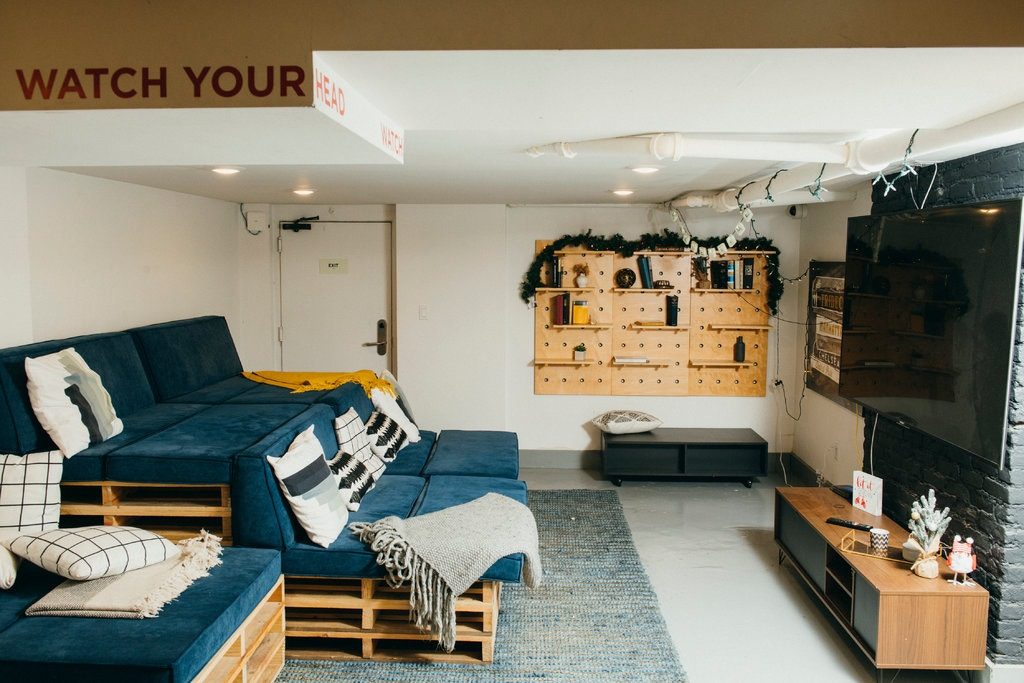 Communal space in the East Village building includes this movie room. Credit: George Etheredge for The New York Times
Although there are differences among co-living companies — some focus on communal life with comfy lounges and social activities, others emphasize getting out into the neighborhood — all do essentially the same things: trick out rooms, hook up utilities, hire housekeepers to clean and maybe replenish toiletries, match up roommates — and charge a monthly rent that covers all of the above. They also offer wiggle room in the lease term.

But as more co-living companies muscle their way into New York — and competition among them heats up — some are upping the ante. They are jazzing up the décor in their buildings. They are giving some rooms private bathrooms and adding full-fledged studios and one-bedroom apartments so a resident can graduate from a shared apartment to his or her very own place. And they are not only retrofitting apartments in existing small- and medium-size buildings but also working with developers to add co-living to new large-scale projects — or even planning their own buildings from scratch. 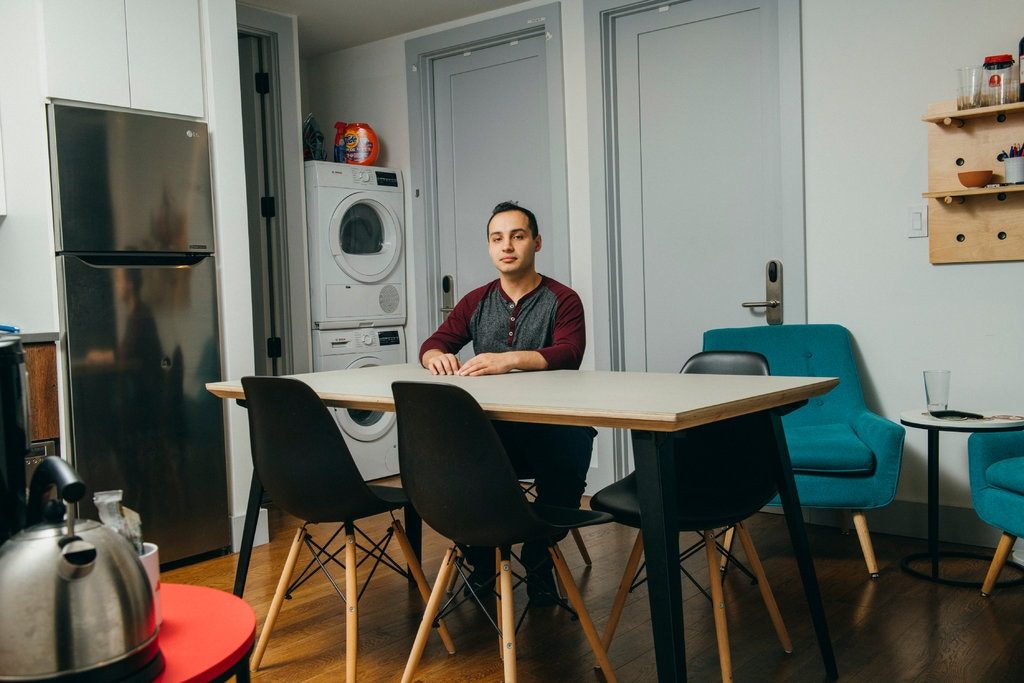 Andrew Athanasiadis shares a three-bedroom, one-bath apartment in a co-living building in the East Village run by Quarters. The common space in his apartment combines living room, kitchen and laundry room. Credit: George Etheredge for The New York Times

For tenants, none of it comes cheap.

The San Francisco-based Bungalow, which typically works with owners of small buildings, offers some of the least expensive co-living rooms in New York, based on a comparison of prices online. But the furnishings are fairly basic and the housekeeping monthly rather than weekly.

Generally, the all-inclusive rent for a co-living room starts at around $1,300 and can run well over $2,000 for a room with an en suite bath — not unreasonable, perhaps, considering all that’s covered in the monthly fee, but not exactly low budget.

Still, for those moving to New York for the first time, or for a finite period, the arrangement can be a boon.

It certainly has been for Andrew Athanasiadis, a Chicago native. He had two weeks to find a place to live here after landing a job at Cushman & Wakefield, but he didn’t know New York well and was loathe to get locked into a long-term lease for fear he’d end up in a neighborhood he didn’t like.

A Chicago friend had mentioned the co-living company Quarters, which was founded in Berlin and had opened a project in Mr. Athanasiadis’s hometown. Quarters, he learned, also operates two locations in Manhattan (and has three more in the works, in Brooklyn).

A bedroom was available in a three-bedroom, one-bath apartment in the company’s building in the East Village and he signed a six-month lease at a rate of $1,700. He was grateful not to have to “buy all new everything” and figured he could move once he got his bearings. 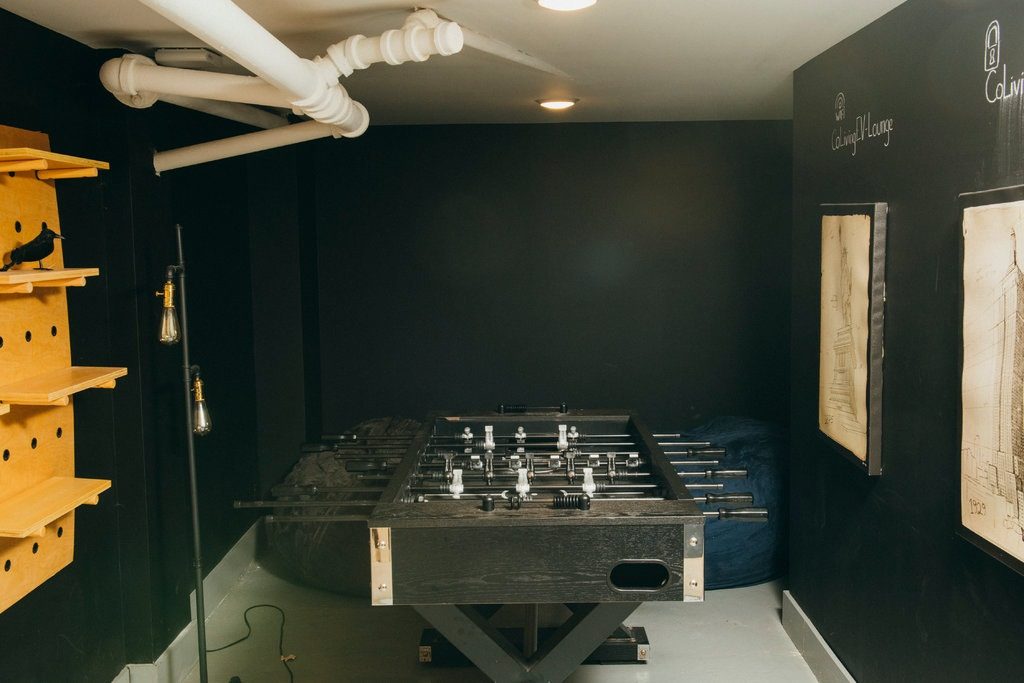 The building’s communal space also has a foosball table. Credit: George Etheredge for The New York Times
But he found he liked the social activities in the building, which include weekly happy hours, as well as outings that he and other residents planned on their own, such as a trip to the Hamptons over the summer. The building provided an instant social network. And its location meant an easy commute to work.

Recently he renewed his lease, locking in a discounted rate of $1,600 because he signed for another six months. Mr. Athanasiadis, who is 30, said that eventually he will want his own place. For now, he added, “as long as the price is right I see no reason to move.”

Although Mr. Athanasiadis’s building is a six-story brick apartment house from the 1920s that was retrofitted for co-living, Simon Baron Development’s Alta+ rental tower, which opened in 2018 in Long Island City, devoted the second through the 16th of its 43 floors to co-living from the start. The co-living operator Ollie advised on the layouts of the 169 shared suites on those floors and now manages them.

The model co-living apartment is 918 square feet — the size of a one-bedroom one-bath apartment on the regular upper floors of the building. By eliminating the living room, Ollie managed to fit in three modestly sized bedrooms, two baths and a kitchen. And perhaps borrowing a page from the micro-unit trend, the company outfitted the bedrooms with Murphy beds and multifunctional furniture so they could each feel like a living room during the day.

While Alta+ combines co-living and conventional apartments in a single building, the Collective, a London-based company, is experimenting with co-living/hotel hybrids.

The company recently acquired a century-old industrial plant in Long Island City that had been converted to a 125-room hotel called the Paper Factory (the building once produced newsprint). After a few tweaks and a rebranding, the property was relaunched late last year as the Collective Paper Factory, offering rooms available for a single night or up to 29 (the maximum stay starts at $2,300).

And the Collective has three ground-up projects in progress. Working with Tower Holdings Group, a local developer, the company will soon begin constructing a 439-unit project in the Bedford-Stuyvesant neighborhood of Brooklyn; it will offer a combination of short- and long-stay rooms across three buildings. In southeast Williamsburg, it will build a 26-story tower with 246 co-living units and 306 hotel rooms. And a central Williamsburg project will combine 97 rooms of student housing with 127 studios for nightly and monthly stays. All rooms will have private baths.

The projects, which are expected to be completed in 2022, will also offer amenities associated with luxury housing. The southeast Williamsburg building, for instance, will have multiple lounges along with a hammam/spa and a music practice room. 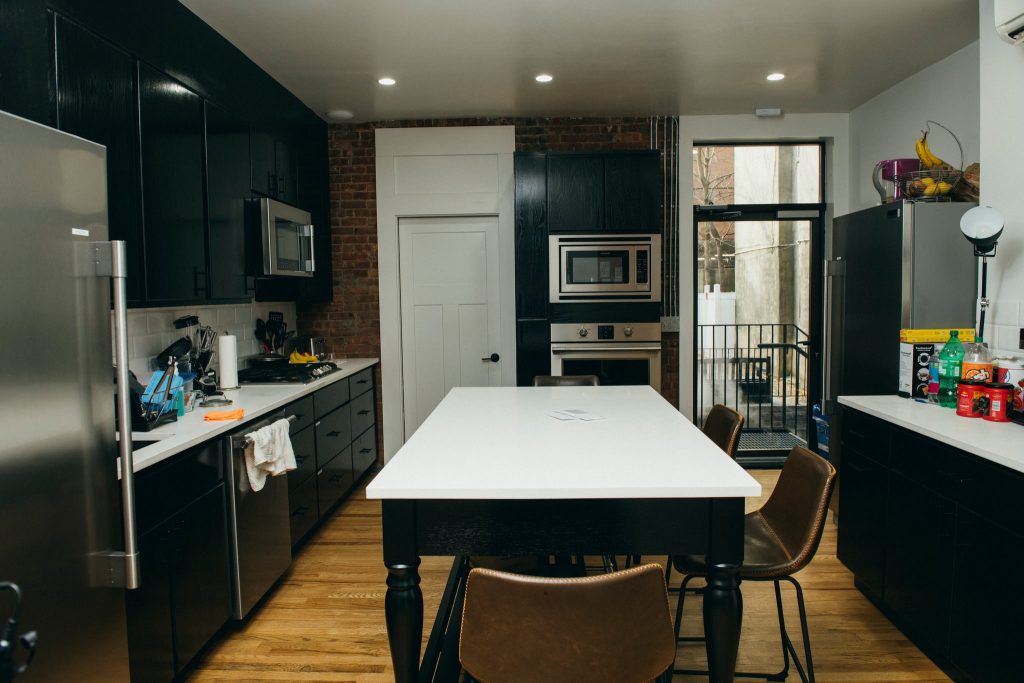 A shared kitchen in the Harlem co-living building. Credit: George Etheredge for The New York Times
While such projects may point in a plush direction for co-living, there are also plans for projects dedicated to those of more modest means — the 21st-century equivalent, perhaps, of 19th-century boardinghouses and 20th-century single room occupancy hotels. 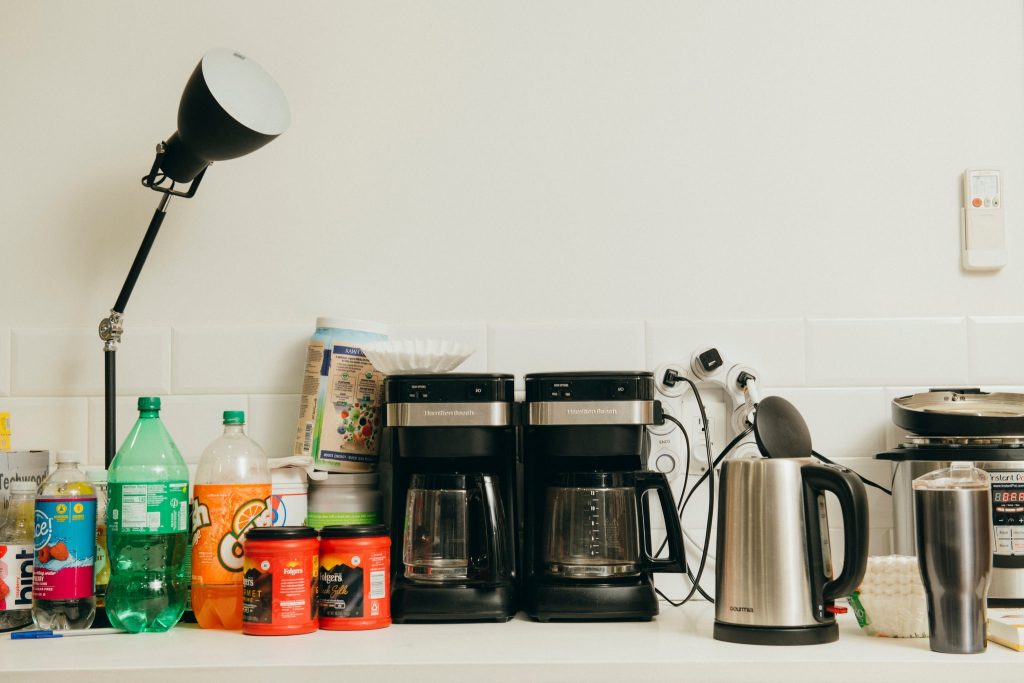 Kitchens in co-living apartments often feature multiple coffee makers to make sure everyone’s caffeine quota is covered in the morning. Credit:George Etheredge for The New York Times
The city’s Department of Housing Preservation and Development recently held a competition eliciting proposals for co-living projects that would become part of the city’s affordable housing efforts. In October the agency announced that it had chosen three “shared housing” projects to be constructed over the next few years.

The largest of these, in East Harlem, will be developed by Common working with L+M Development Partners and LIHC Investment Group, an affordable housing owner. Two-thirds of the units in the project will go to tenants earning 50, 80 and 120 percent of city’s area median income. The lowest rent: around $800.