The border of Ridgewood and Bushwick, collectively “Ridgewick,” is a vibrant neighborhood located in the northern part of Brooklyn, New York.   As prices continue to rise for retail, residential, and office properties in neighboring Williamsburg, creative types have been filing into Ridgewick bringing with them new bars, Michelin rated restaurants, hip coffee shops, live music venues, and gallery space that all continue to flourish.  Bushwick is gaining global attention, having been named the “7th Coolest Neighborhood in the World” by Vogue Magazine.  Although Ridgewick is constantly reinventing itself, an authentic bohemian heart still beats beneath its remodeled exterior. 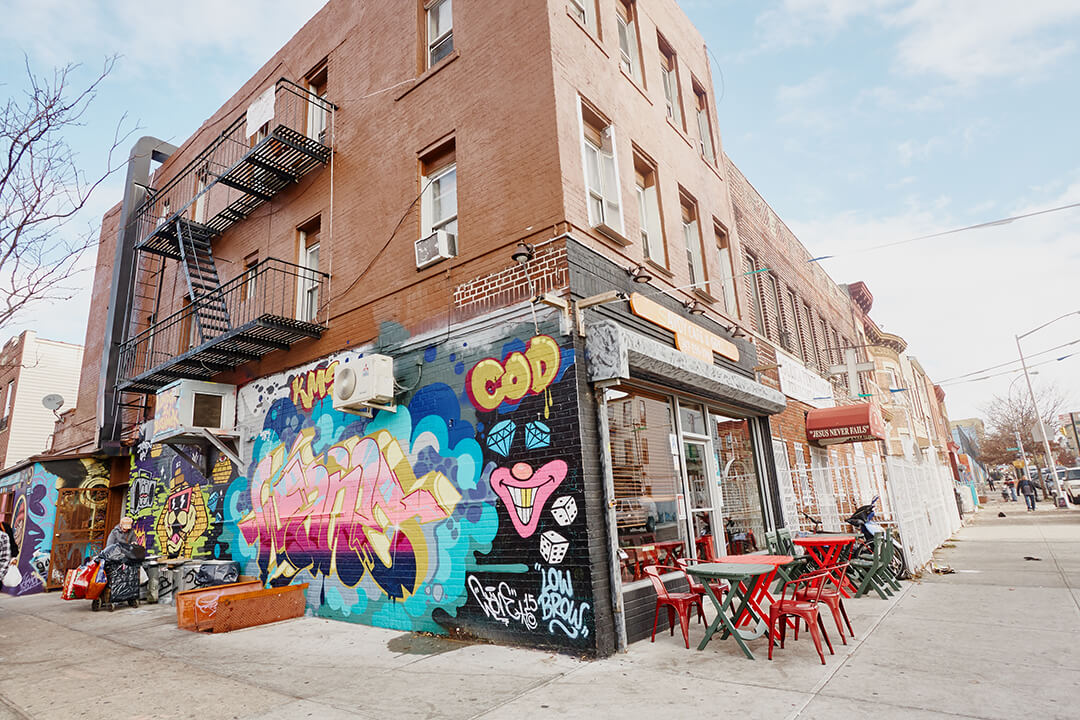 Culture
The art scene, from galleries to festivals, is a hallmark of Ridgewick.  Reputable galleries include: The Lorimoto Art Gallery and Jim Hodge’s Art Gallery; The BogArt; Loft 594; Regina Rex; and Harbor Gallery.  Up and coming artists are finding a home in the new developments of artists’ lofts on Wyckoff and Eldert Streets creating an artistically driven environment.  The Bushwick Collective is an outdoor street art gallery that allows famous NYC graffiti artists and international painters to legally paint on buildings all over the district.  Bushwick Open Studios is a three day arts and culture festival and New York’s largest open studio event.  Broadway Stages is drawing actors of all types including George Clooney and Bill Murray, who recently filmed a movie at 1019 Irving Avenue.  The flow of artists, students, families and young professionals continues to move east along the L train, as Williamsburg prices push them out.

Food
Ridgewick is home to many restaurants and live music and entertainment venues including Billy’s, Pearl’s Social Club, The Evergreen, The Acheron, Lone Wolf, and Shea Stadium.  Microbreweries continue to pop up in the area including Bridge and Tunnel Brewery, and Queens Brewery.  Shops at the Loom is a converted textile mill that now serves as a 20-store mini-mall.  It includes a yoga studio, community darkroom and skate-board shop.  Top restaurants and cafes such as Northeast Kingdom, Roberta’s, Blanca’s (Michelin 2 star rated), Momo Sushi Shack and 108 Central Café attract patrons from all over New York City.  Ridgewick also includes Houdini Kitchen Laboratory and Rudy’s Bakery, home to the classically trained pastry chef, Cristina Nastasi, and her famous Black Forest Cake.

Creative Commercial
Rising rents in Manhattan and other parts of Brooklyn, such as Williamsburg and Greenpoint, make Ridgewick an affordable and attractive alternative with superb public transportation.  A recent report showed that 34% of Brooklyn renters are employed by tech or creative companies, compared with 25% in Manhattan.* These tenants typically require a large amount of space, high ceilings and excellent column spacing.

As of July 2013, approximately 2.6MM people live in Brooklyn, making it the third largest city in the United States.  With 43MM square feet of office space, the Brooklyn office market is already larger than the downtown Los Angeles office market, and continues to expand.  Brooklyn is currently seeing its first speculative office building since the 1920’s taking shape at 25 Kent Avenue and a growing live-work environment is attracting numerous tenants.** Properties with lower rents, access to transportation routes and proximity to a skilled labor force will draw many companies to Ridgewood and Bushwick.

TAMI Tenants Leading Creative Commercial Growth
The technology, advertising, media and information industry (TAMI) is in a growth stage and Brooklyn is an untapped market for these companies given employees live here and want to work nearby. In the first half of 2014, the TAMI sector exceeded the financial sector in terms of the number of tenants in the market and their demand for space.  According to a report from Newmark Grubb Knight Frank, Brooklyn’s office market availability rate decreased to 4.1% from 6.5% one year ago, compared to Midtown South, which at 8.8% is widely believed to be one of the lowest availability rates in the US.  The warehouse-conversion to creative retail/office prototype has been proved successful in various neighborhoods of Brooklyn.  Many companies now desire a Brooklyn address to draw in younger employees who already live there and prefer the energetic atmosphere and cutting-edge amenity selection.

The migration of young professionals from Manhattan to Brooklyn has helped spur the TAMI sector growth in the area as well.  Well-known companies such as Livestream, Kickstarter, Etsy and Vice have chosen North Brooklyn for their offices.  Vice Media, an internationally renowned new media company, recently signed an 8-year, 70,000 SF lease on the south side of Williamsburg at 285 Kent Avenue for $55/SF.  Last year WeWork signed on for 40,000 SF above the Williamsburg Whole Foods for $50/SF.  This is emblematic of Williamsburg as a whole, as office tenants are now signing leases comparable to space in Manhattan which is overflowing into East Williamsburg, Ridgewood, and Bushwick.

* As Per On-Site.com, a provider of electronic tenant screening and lease-processing services for landlords.
** Colliers International Q4 2014 Office Market Report.