When Emerging Market contagion reaches the shores of Sardinia and Amalfi, it could be a sign that summer is over!! 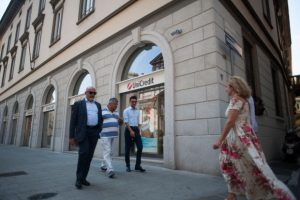 There are lots of reasons why contagion has been contained, but none are entirely satisfactory

The Italian bond market has a whiff of panic about it, while the rest of Europe has remained remarkably calm. This makes little sense, and is unlikely to last.

The basic logic runs like this. The rise in Italian yields relative to those of safe Germany is a sign that investors think Italy is more likely to default on its bonds, more likely to leave the euro and repay in devalued lira, or both. Fair enough: The populists now governing in Rome are unpredictable, and Italy’s government-debt pile is large.

Yet, it is obvious to everyone that if the third-biggest economy in the eurozone were to default on €2.3 trillion ($2.64 trillion) of debt or leave the currency area, it would at the very least blow up the rest of the Southern European countries. The bond yields of Spain, Portugal and Greece would soar, even if somehow they were able to remain within the euro.

“Italy is not Greece” is usually invoked as reassurance. In fact, the situation in Italy is a whole lot worse than Greece, because the solution applied to Athens—a default within the eurozone and capital controls—couldn’t plausibly be applied to Italy’s much more important economy and much larger debts.

This should mean that higher risk to Italy is also a higher risk to other countries that would face trouble, not to mention the many large European banks with significant Italian exposure.

So why has contagion been contained? There are lots of answers, none entirely satisfactory.
First is the idea that everything is fine because Italy isn’t in a full-blown crisis. While Italian government-bond yields have jumped, pushing up the spread over German yields that is the standard risk gauge, they aren’t high enough to make Italy’s debt unsustainable by themselves. Put another way, investors think everything will be fixed after a bit of pressure on the government in the form of higher yields.

“It’s fairly consensual that it will be resolved with another round of market pressure,” says Gilles Moëc, chief developed Europe economist at Bank of America Merrill Lynch.

But this is a dangerous game. If the market pushes up borrowing costs too much, Italy would be unable to service its debt with politically plausible tax levels. At that point, the spiral would become self-fulfilling, as investors fled and credit ratings were downgraded, and yields rose even more. Serious contagion would be all but assured. Don’t forget how suddenly Italian bond yields spiked in 2011 and again in 2012.

Harvinder Sian, a bond strategist at Citigroup, thinks a 10-year yield of 3.5%-4% is now the tipping point, after which yields jump toward the 7% reached at the height of the last euro crisis. Italy isn’t quite there, but on Tuesday its 10-year yield briefly reached 3.46%, the highest in four years.

A second explanation is that the lack of contagion is due to the quirks of supply and demand in Europe. Investors in European bonds are desperate for yield, and while they now worry about Italy, they have simply switched to other countries offering a decent pickup over German yields, such as Spain. At the same time, the threat of billions of euros of extra Italian bond issuance to finance its planned larger budget deficit next year means a higher yield is needed to attract buyers.

If eurozone governments were regarded as equally risky, any significant gap in yields would be pounced on by speculators. But arbitrage is difficult when there is such an obvious danger of a sudden jump in Italian yields, and outright buyers are deterred both by the risks and by worries that clients may be upset to find themselves heavily exposed to Italy.

One exception is UBS Wealth Management, which has piled into short-dated Italian bonds recently for the extra yield, arguing that Italy won’t default in the next two years.

Chief Investment Officer Mark Haefele says rather than infect other eurozone government bonds, Italian contagion shows up in the fall in the euro—perhaps linked to the idea that the European Central Bank will step in to buy more bonds of countries such as Spain that have restructured their economies and followed European debt rules.

This leads to a third possible explanation, involving even more intervention. A catastrophic Italian default or euro exit might finally push the rest of the eurozone to integrate properly, something that has proved politically toxic in Germany. “Italy could be the final straw that forces Europe closer together,” Mr. Haefele says.

True risk-sharing across the eurozone—in effect a united states of Europe—would make Spanish bonds only as risky as German bonds, justifying the absence of contagion. But it is hard to believe that divided European leaders worried about a populist backlash could take such a step, let alone bring German voters with them.

The market can stay irrational for a long time, and Italian politics is even more unpredictable than usual. My best guess is that a compromise will calm everything down for a while. But the danger of an Italian falling-out with Brussels prompting a self-fulfilling market crisis is real. At that point, contagion would be inevitable.