In early June, New York State Lawmakers passed the Housing Stability and Tenant Protection Act of 2019. The legislation is a sweeping overhaul of rent laws aimed at increasing tenant’s rights and limiting landlord’s ability to increase rents, evict delinquent tenants and move units to free market status. There are a number of notable changes that come as a result of the rent reform, as outlined below:

Statewide Optionality: Prior geographical restrictions on the applicability of rent laws have been removed, allowing any municipality that otherwise meets the statutory requirements to opt into rent stabilization.

Vacancy & Longevity Bonus: Landlords were previously able to raise rents as much as 20% each time a unit became vacant. This bonus has been repealed.

High Rent Vacancy Deregulation & High Income Deregulation: Prior to the 2019 reform, units would become exempt from rent regulation laws once the rent reached a statutory high-rent threshold and the unit was vacated or the tenant’s income was $200,000 or higher in the previous two years. This decontrol is no longer applicable under the 2019 reform. 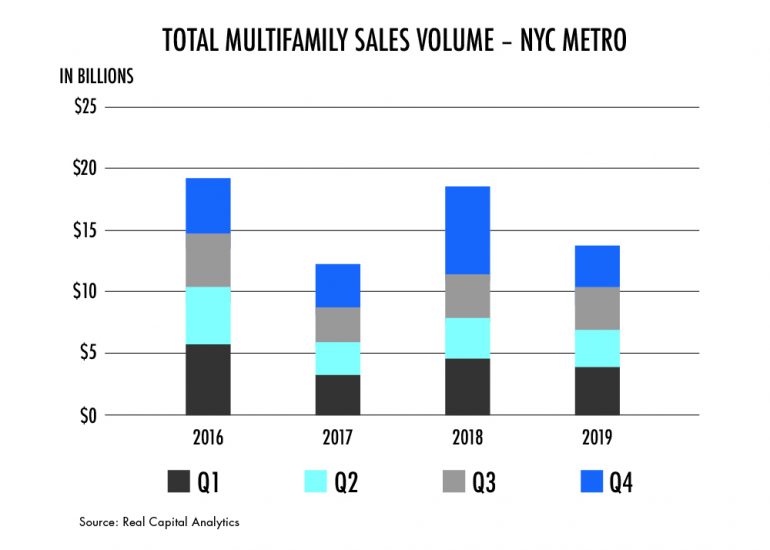 The new regulations make it difficult for landlords to upgrade and convert existing rent stabilized units into market-rate apartments, essentially limiting the potential upside from investing in primarily rent stabilized buildings. As a result, investment activity decreased significantly in 2019. Total sales volume for NYC multifamily properties was just $13.8Bn in 2019, down 26.1% from the $18.7Bn seen in 2018, according to Real Capital Analytics. The new regulations have halted individual apartment improvements as well as any major capital improvements as landlords are no longer rewarded with higher rents for improving units. It is important to note that while investment activity decreased significantly in 2019, sales volume still outpaced the $12.4Bn seen in 2017. 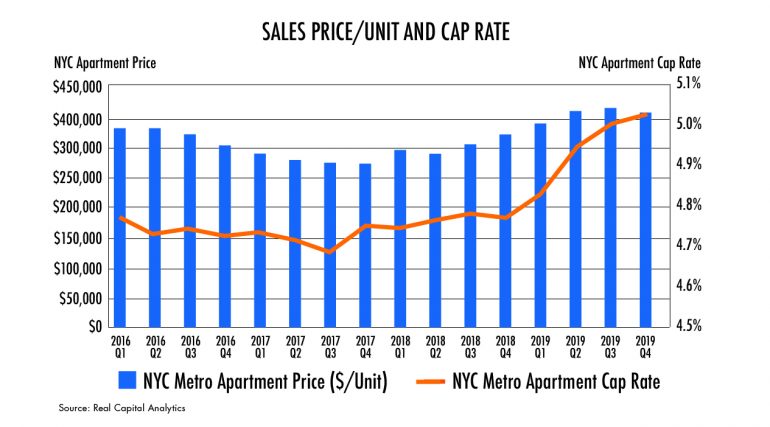 As we enter the first quarter of 2020, the possibility of discounted multifamily valuations coupled with historically low interest rates have attracted investors with a different business model buying loans at par where LTV’s have increased and maturity is looming. On the contrary, the new regulations create a unique challenge for those who have either purchased or lent on multifamily assets in New York under the assumption of significant future rent appreciation. For those investors/lenders, the future may not be as grim as they might expect. Despite several discount sales and declining sales volume, price per unit in the NYC multifamily market has remained steady, declining slightly at the end of 2019. Furthermore, cap rates have widened by just 26 bps in 2019, offering both investors and lenders the option to sell off assets that exceed their risk tolerance and mitigate any future losses. Investors and lenders should assess the viability of selling off assets that are heavily affected by the new regulations as strong pricing levels from market players with adapted business models may result in a less costly outcome than internal resolution.