others rack up note sale deals 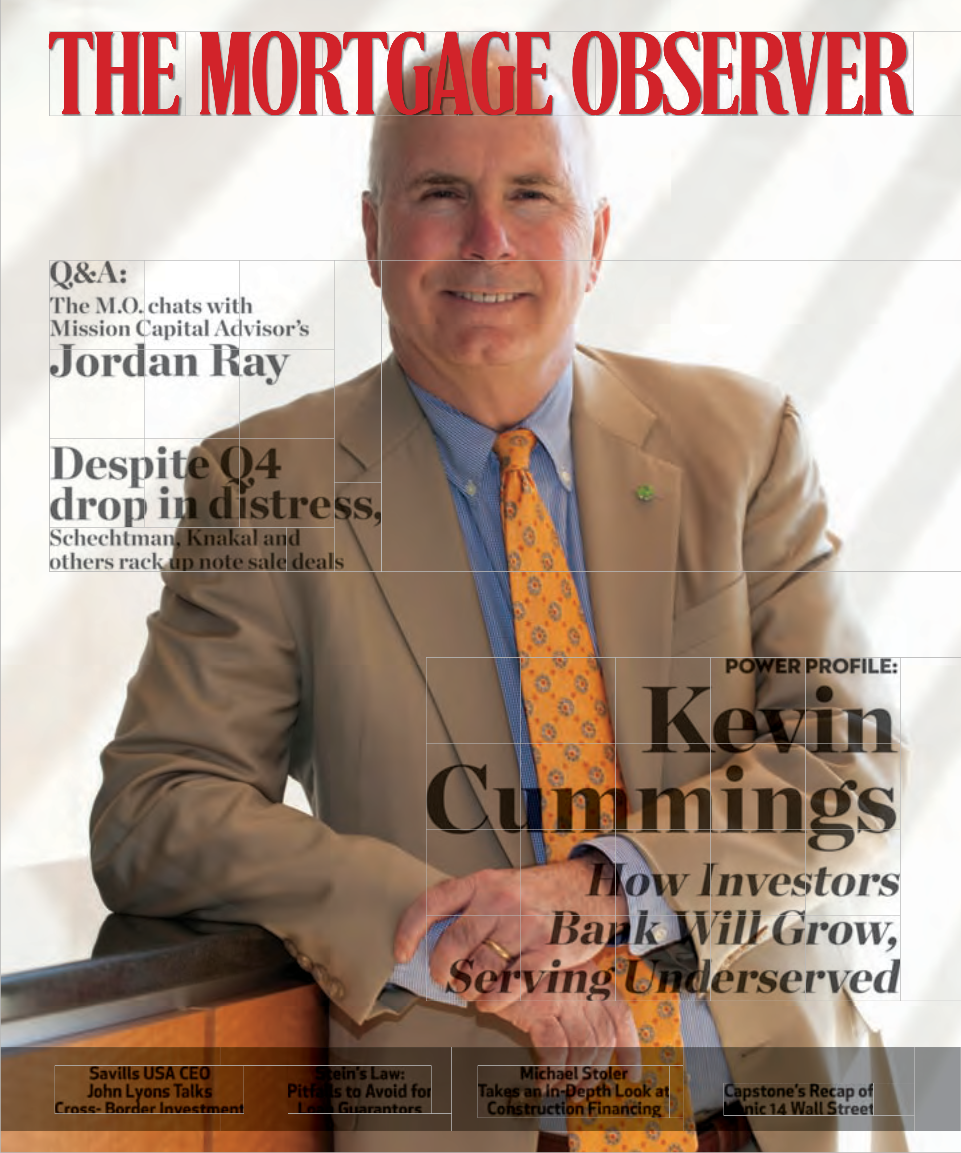 Takes an In-Depth Look at

age here is in the 30s. We all sort of rode the wave

of technology boom like everybody else did. One of

the things that attracted me to Mission was that when

The Mortgage Observer: Can you tell me a little

about your background and how you got started in real estate?

Jordan Ray: I’ve been in the business since 2001. I started out at Ackman-Ziff and I was there for almost five years. I’ve been a commercial mortgage broker and equity advisor for my entire career—ever since graduating from the NYU program. I grew up in Mon- treal and in Palm Beach County, Florida, and went to school in D.C. at American University.

I started working at Ackman-Ziff when I was in grad school—it was a great place to grow up in this side of the business. In 2009 when the world started to turn and there really wasn’t a lot of financ- ing, everybody started thinking about the future. It was an opportunity for me to come here to join Mission with a colleague of mine, Jason Cohen, be- cause he knew the guys over here and Mission has been one of the most active loan sales advisors in the country—selling about a billion dollars of sub- and nonperforming debt every quarter. And they had no real finance desk. The idea was to come here and sell loans for a year to do something because there wasn’t much going on, but always have an eye toward starting the finance business when the mar- ket came back. Last year was our first year back in the finance business—we did about $540 million of debt and equity.

Can you give me some idea of what your day-to- day is like?

When a deal comes in I’m spending about 85 percent of my time on the deal. Now that we’re hiring more execution folks, I’m planning to spend more time looking for new business. On the execution side when we’re placing business we spend a lot of time up front on a deal figuring it out.
We have a very heavy technology focus here at Mission. That sort of sets us apart from where I used to be—not that there’s anything bad. It’s just a little different because we’re a younger firm. The average
they sell loans, generally investors know it is a very tech-heavy process, so we spend a lot of money on proprietary data rooms and proprietary customer rela- tions management so we know exactly who is doing what at any given time.

What’s the firm’s philosophy regarding growth?

We have very little turnover here, which is something that is rare. The guys who make the decisions about this business all come from other brokerage firms. So we’ve all seen the pitfalls of growth. We’ve seen good and bad. We’ve seen smart growth and we’ve seen just adding bodies to add bodies because it makes more money. We’ve been very slow to add bodies because when you bring someone in, you want to make a com- mitment to them and you want to know that they’re going to be there for the long haul because we have a very interesting environment.

Regarding the economic climate—is there less uncertainty out there compared with six months or a year ago?

We’re adding jobs slowly. We’re adding different kinds of jobs in places like New York. There’s a lot of tech now—a lot less finance, a lot more tech. Rates are probably artificially low, as we all know. Unfortunately I’m not much of an economist. I’m just an advisor, so all I can do is try to find the best deals for my clients at any given time in the cycle. I do know that when you look at some of the things that are holding our side down, i.e. banks that are stuck with product, too many loans clogging their pipelines, that stuff is fil- tering out slowly. There’s more lending because the cream is rising to the top a little bit but the healthy lenders are starting to lend and ones that aren’t are sort of petering out. And that’s another point, by the way, just to back up for a second. The loan sale busi- ness has helped us find and start relationships with regional and local banks that I probably never would have had before because those are the clients on the loan sale side.

Is lending loosening a little bit? Or is it still for the select borrower in select markets?

It always helps to have a high-class, very-top-tier spon- sor. We’ve done a couple of deals where, especially on the construction side, where you have a great deal but in order to have it financeable in our opinion you need to bring in a partner to add horsepower to the borrow- ing entity. So we’ve done a couple of deals where that has been the case and we think that if you are going to do a large construction deal, you sort of need to be a bank’s … you need to be their one or two deals like that that year right now.

Where do you see capital flowing today? Is it the usual places?

Look, everybody likes to use the sound bytes and they’re all the same—gateway markets and all that boring stuff and you can even joke about that, but the reality is that there’s a reason we call them gateway markets and capital cities. Lenders and investors want to be in markets where the recovery is happening the fastest. We’ve been doing a lot of work in New York, D.C. and Miami.
We did a large condominium project here in New York last year where we brought in a very prominent private equity fund to be a partner in the equity. It’s a deal on 18th street—210 West 18th Street. We rep- resented that venture to close in a $97.5 million con- struction loan. That was a two bank deal.

Where do you see the securitization market going these days? Is it picking back up?

It’s certainly picking up. There’s a lot of fixed-rate se- curitization shops out there—secondary and primary shops. When the securitization market is chugging it’s sort of a commodity. It’s about who can give you the best execution.