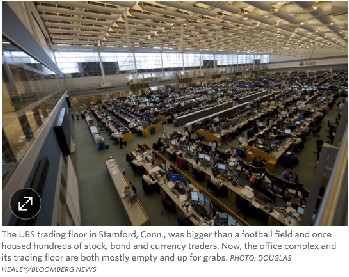 For sale cheap: the world’s largest trading floor.
The property was part of a lavish development in Stamford, Conn., in the 1990s designed to lure what was then Swiss Bank Corp. and thousands of workers away from New York.
Soaring 40 feet high, the trading floor was bigger than a football field, unimpeded by columns and soon filled with hundreds of stock, bond and currency traders.
Now the office complex and its once-iconic trading floor are both mostly empty and up for grabs.
CW Capital Asset Management, the servicer that controls the $149.4 million mortgage on the
712,000-square-foot complex near the Stamford train station, has hired Mission Capital Advisors
to put the debt on the block, according to people familiar with the matter.
The mortgage is widely expected to sell for well under that amount, given that the property has been vacated by its tenant, UBS Group AG.
UBS merged with Swiss Bank in the late 1990s but has shrunk its Stamford operations in recent years.
The Stamford office market, meanwhile, is suffering one of the highest vacancy rates in the U.S., at more than 30%.
“If you look at the amount of tenants coming into this market versus the overhang of space, you would see it’s going to take many, many years to lease all the large blocks up,” said David Block, a senior vice president in the Stamford office of real-estate services giant CBRE

Real-estate industry executives predict that whoever buys the mortgage will soon become owner of the complex at 677 Washington Boulevard. The complex currently is controlled by AVG Partners, a Beverly Hills, Calif., investment firm, according to a person familiar with the matter. The property’s owner defaulted on the mortgage in October when it was due to be repaid, according to Trepp LLC, a data firm that tracks the commercial real-estate debt market.
AVG Partners didn’t return requests for comment.
The empty trading floor has become a symbol of the end of a freewheeling era on Wall Street in which banks and hedge funds made vast sums buying and selling securities. The financial crisis prompted a wave of regulation making it more difficult for banks to trade their own capital. Hedge funds, meanwhile, retrenched.
The saga also spotlights the double-whammy that has hit the Stamford office market in recent years. First, urban downtowns like New York, with their young and creative workforces, have become more attractive to employers than suburbs and satellite cities like Stamford.
At the same time, the contraction of the financial-services industry has hit two of Stamford’s biggest employers: UBS and Royal Bank of Scotland Group PLC.
UBS moved its Stamford operations out of 677 Washington mostly to space nearby that had formerly housed RBS, which also has shrunk its presence in the area. UBS reported last year that its Connecticut staff had dropped by 500 to roughly 2,000 employees, compared with 5,000 five years ago.
The picture was a lot rosier in 1994 when the state of Connecticut lured Swiss Bank to Stamford partly by offering $120 million in tax credits. Back then, with Rudolph Giuliani just starting his
first term as New York City mayor, businesses were leaving New York and Stamford was dreaming of becoming a new financial center.
But Stamford has been struggling ever since the 2008 financial crash, even as New York has rebounded. In 2011, when UBS was eyeing a move back into Manhattan, Connecticut gave the firm a $20 million incentive package to stay.
State officials and landlords are hopeful the incoming Trump administration will stoke expansion in financial services. They also pointed out that smaller financial-services companies continue to thrive in the area.
“Having your back office in Connecticut isn’t as important a move as it used to be,”
said Catherine Smith, who heads the state’s Department of Economic and Community Development. “But we’re still seeing quite a bit of demand from hedge funds, private-equity firms and the insurance industry.”
What does one do with a trading floor that has expanded over the years to about 100,000 square feet? Suggestions have ranged from the whimsical—like a roller derby rink—to the more prosaic, like call centers.
Ms. Smith suggested the floor could be converted into a film or television studio. “A lot of television has come out of New York into Stamford,” she said.
The mortgage on 677 Washington was made in 2004 and converted into commercial mortgage- backed securities. Its sale will likely mean big losses for some of the bondholders because of the low value of the property.
Last year, the vacant former Pitney Bowes headquarters in Stamford sold for close to $40 million, or roughly $90 a square foot. At that rate, 677 Washington would be worth about $65 million.