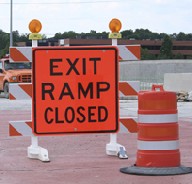 The pace of bank failures through July slowed down compared to last year, but there are still expectations that it could be rough second half of 2012, according to the latest figures from Trepp.
In July, eight banks failed, which is one more closure than the previous month but down from 13 a year ago, the New York­based analytic firm said.
All of the bank failures last month occurred in the Southeast (5) and the Midwest (3). Georgia had four closures in July, helping it increase its overall total for the year to nine, which leads the nation. There was also one termination each in Florida, Illinois, Kansas and Missouri.
The banks that failed last month had been on the Trepp Watchlist for a median of 14 quarters.

Two of the banks were on the Watchlist for 16 quarters prior to failing, which marks a new record length.
Trepp said commercial real estate exposure was the main detriment for the banks that failed in July, comprising $142.8 million of the total $202.8 million in nonperforming loans.
Other areas of distress that made up the nonperforming loan total were residential mortgages with $38.9 million, construction and land loans accounted for $84.7 million and commercial mortgages consisted of $58.1 million.
So far this year, 39 banks have shut down. This is down substantially from 61 and 108 that closed during the same time period a year ago and through July 2010, respectively.
Despite the slowing pace, Trepp said there are still 190 banks at high risk of failure, therefore resulting in the expectations that more closures will take place before the end of the year. Among those financial institutions who have the greatest risk, 36 are located in Georgia, followed by Florida with 26, Illinois has 24, 11 are in Minnesota, North Carolina has 10, eight in Tennessee and Missouri with seven.
Even though there was an uptick in bank closures in June and July, the pace through the first seven months of the year has fallen to
5.6 a month. In 2011, the failure pace was 7.7 per month.
At the current pace, Trepp estimates 67 bank failures to happen in 2012, which is slightly higher than 50 to 60 shut downs the FDIC
predicted earlier this year.
“The slower pace of bank closures is attributable to more time being ‘added to the clock’ for ailing banks, as well as some actual progress among these banks in capital raising and performance improvement,” Trepp said in its report. “However, the slower pace of closures will likely mean that failures will continue into 2013 and possibly beyond, depending on the strength of the economy in general and real estate market conditions in particular.”
David Tobin, principal at Mission Capital Advisors based in New York, said the FDIC’s disciplined approach to assisted takeovers, loss shares and asset sales has helped stimulate market demand for sales of private sector distressed and performing debt.
“The lower bank failure rate year­over­year is proof positive that the measure taken in the U.S. by the Fed, FDIC and banks themselves to dispose of distressed assets and hold others in portfolio, were spot on," Tobin said in an email to this publication. "In fact, U.S. distressed debt methodologies should be emulated by Europe to mitigate the banking crisis there, which, in turn, would stimulate growth and demand worldwide via a healthier banking and lending market.”