Chesapeake Square Mall, an 28-year-old enclosed mall with several anchors, is for sale.

The Loan and Asset Sales Group of Mission Capital Advisors is marketing the property as a repositioning play. It was turned over to a special servicing company in 2015 and sold back to the lender following a foreclosure sale in April 2016. At the time of the sale, the balance on the loan was $60.1 million, according to a report from Trepp.

Both the mall and the Cinemark Theater next to it are listed as properties for sale on the Mission Capital Advisors website.

The Target store is not listed as part of the sale.

Chesapeake Square has suffered from lack of stores and the departure of anchors like Macy’s and Sears over the last several years. However, it was recently announced that three new businesses will be opening at the mall. 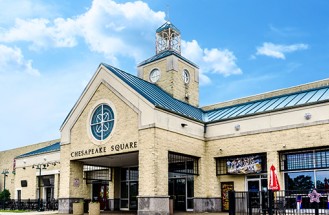 The Loan and Asset Sales Group of Mission Capital Advisors is marketing the property as a repositioning play. It was turned over to a special servicing company in 2015 and sold back to the lender following a foreclosure sale in April 2016. At the time of the sale, the balance on the loan was $60.1 million, according to a report from Trepp.

“The asset, which retains a base of strong tenants, presents a unique opportunity to make use of a well ­located property in an affluent metropolitan area that is experiencing rapid growth,” Michael Britvan, a managing director with Mission Capital, said in a statement.

The offering includes nearly the entirety of the property, 613,809 square feet of the mall’s 760,420 square feet. Four of six anchor spaces are included, with tenants including Burlington Coat Factory and J.C. Penney. The other two anchor spaces, previously held by Macy’s and Sears, are vacant. Two additional anchor spaces are independently owned and occupied by Target and Cinemark XD, (a movie theater), and are not part of the mall that’s for sale.

The entire mall contains about 100 stores, restaurants and kiosks, and a 10­unit food court. Some of the tenants include Foot Locker, Bath & Body Works, Kay Jewelers, Lids and Mrs. Fields. Overall, the offered space is 58 percent occupied.

Most recently renovated in 1999, the mall is a single ­level property that opened in October 1989. It’s located at 4200 Portsmouth Blvd., off I­664 at the intersection of Portsmouth Boulevard and Taylor Road.

The mall’s location and the region’s demographics are drawing interest from investors, Britvan told Virginia Business.

Chesapeake, with a population of 238,000, is part of a metropolitan area of more than of 1.7 million people, which is home to several major military institutions and bases. “…the immediate submarket surrounding the mall includes affluent suburbs along Portsmouth Boulevard,” added Britvan. “With its in ­place cash flow and potential for redevelopment we expect to see a lot of interest in this asset.”

Britvan said there is no list price per say for the mall. With retail closures and bankruptcies at an all­ time high in 2017, there are plenty of opportunities for investors. “You get it at an attractive basis, that allows you to do some creative things and to maximize value going forward,” he said.

“One of the things that kept sticking out, as we did our diligence, is how strong of a market this is. It has numerous strong employers, the military, above U.S. average income …There’s nearby retail, nearby single ­family development, so that bodes well compared to some of the dead and dying malls we see in more rural markets,” Britvan said. “It’s about as good as a demographic as one could ask for.

The offer date for the mall is Aug. 15. “Right now our target, the folks who are looking at us, are a wide class of investors — from local owners and operators to national players that are targeting stressed and underperforming mall assets across the country. There are some institutional players as well,” Britvan said.