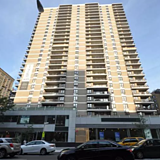 Mission Capital Advisors announced that its Debt and Equity Finance Group has arranged approximately $20 million of equity financing for the acquisition of 146 rent-regulated condominiums at 733 Amsterdam Avenue, a luxury residential property in Manhattan. Jason Parker and Jeff Granowitz represented ABC Properties in bringing in a majority equity partner to facilitate the transaction with seller Starrett Corp. Mack Real Estate Credit Strategies also provided the buyers with a $55-million acquisition loan.

Constructed in 1971, the property — which is also identified as 175 West 95th Street — is a 27-story, 229-unit multifamily building. In 2015, the seller converted the building to condominiums and embarked on a significant capital improvements campaign, including refreshes to the entryway, terraces and common areas. With these enhancements, the property has been transformed into a premier luxury residence, which also features a 24-7 doorman/concierge, a newly-built fitness center, a children’s play space and a lounge.

ABC’s plans for the property include additional capital improvements to both common areas and apartment interiors.

“Our client, Myles Horn of ABC Properties, was seeking to acquire this well-appointed property with significant upside, and we were able to run an exclusive JV equity process in a very short timeframe to bring in a partner that would enable him to move forward with the transaction,” stated Granowitz.

In a separate transaction acquired by ABC Properties in the first quarter of 2017, Mission Capital advised the seller of the $25 million non-performing loan secured by the co-op shares relating to 262 apartments at Skyview on the Hudson in Riverdale, NY.

“Mission had a great experience with ABC on both transactions,” added Parker. “Myles and ABC have consistently been able to execute their value-add business plan and unlock the hidden potential of condominium properties. This is a trophy-type property in one of New York’s most attractive neighborhoods, and Myles recognized the significant potential that this condo package presented.”