In a video interview, David Tobin, principal of New York-based advisory Mission Capital Advisors, said the firm’s developer and operator clients have seen a dramatic impact from the recent run up in Treasury yields.

The FDIC is marketing a $215.5 million portfolio of mixed quality debt on commercial and residential properties in 20 states. The FDIC is seeking bids for an outright sale, but also is willing to sell a stake in the portfolio via its structured-sales program. Investors can begin conducting due diligence on Aug. 23. Bids are due Oct. 1. Mission Capital is running the auction.

The FDIC is marketing a $215.5 million portfolio of mixed- quality debt on commercial and residential properties in 20 states.
The 446 assets, which the agency assumed from 20 failed banks, range from performing loans to foreclosed properties. Commercial buildings account for $166.9 million, or 78%, of the underlying collateral. Another $22.4 million, or 10%, is land suitable for residential development. Acquisition, devel- opment and construction loans and land loans make up the rest of the package.
The FDIC is seeking bids for an outright sale, but also is willing to sell a stake in the portfolio via its “structured-sales” program. Investors can begin conducting due diligence on Aug.
23. Bids are due Oct. 1. Mission Capital is running the auction.
In a structured sale, the winning bidder would work out the
assets and split the proceeds with the FDIC, which may be will-
ing to provide low-cost financing for the purchase. In the 34
structured sales completed since the program began in May
2008, the stakes sold by the FDIC ranged from 20% to 50%.
The average balance on the mix of fixed- and floating-rate
loans in the offered portfolio is just under $500,000. Some 192
mortgages totaling $70.9 million, or 33% of the overall balance,
are current on payments. Another 165 mortgages totaling $92
million (43%) have already matured. The rest are delinquent
by at least a month, including 72 loans totaling $48.5 million
(23%) that are more than 120 days past due.
Some 92 mortgages with balances adding up to $57.7 mil-
lion (27%) mature in the next year, and 63 loans totaling $18.9
million (8.8%) come due in the year after that. The remaining
$46.9 million of notes have maturities ranging up to 25 years
from now.
The collateral properties are concentrated in Pennsylvania 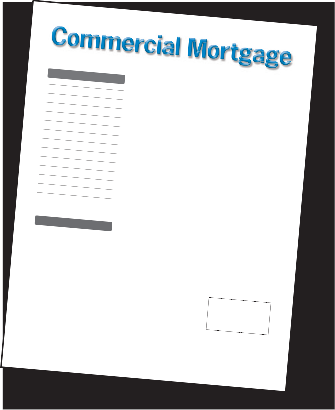 CNO Financial is shopping the senior portion of a performing $19.8 million fixed-rate loan on a shopping center in Hagerstown, Md. CNO is offering the participation interest via its investment management arm, 40/86 Advisors. Mission Capital is handling the auction. 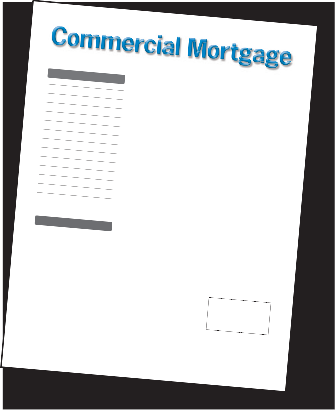 CNO Financial is shopping the senior portion of a performing

$19.8 million fixed-rate loan on a shopping center in Hager-
stown, Md.
The insurer, based in Carmel, Ind., originated the construc-
tion/permanent loan on the 115,000-square-foot Shoppes at
Hagerstown in 2007. The mortgage, with a 6.04% coupon, had
an initial balance of $22.3 million. The maturity date is unclear.
Investors can bid on a senior participation interest of up
to 80%, with CNO retaining the junior portion. Bidders must
specify a yield requirement. Initial offers are due Aug. 28, and
final offers will be taken Sept. 18.
The property is at 18015 Garland Groh Boulevard, near In-
terstate 81 and Route 40, and about 70 miles west of Baltimore.
CNO is offering the participation interest via its investment-
management arm, 40/86 Advisors. Mission Capital is handling
the auction.
CNO unsuccessfully tried to sell the loan two years ago via
an offering of 17 performing mortgages totaling $125 million
on commercial properties around the country.
Shoppes at Hagerstown was 88% occupied at yearend. Its
tenants include Best Buy, Dollar Tree and Party City. The prop-
erty is next to a separately owned retail center with 220,000 sf.
That complex’s tenants include Wal-Mart Supercenter, Home
Depot, PetSmart and Dick’s Sporting Goods. 

Globe St interviews Mission Capital’s Jordan Ray about how the capital markets have changed and what X factors would cause more dramatic change.

JDS Development is seeking $452 million of debt to finance the construction of a 766-unit luxury apartment complex south of the United Nations Building in Manhattan. The New York company is pitching the assignment mainly to U.S. and foreign banks via advisor Mission Capital.

JDS Development is seeking $452 million of debt to finance the construction of a 766-unit luxury apartment complex south of the United Nations Building in Manhattan.

The New York company is pitching the assignment mainly to U.S. and foreign banks via advisor Mission Capital. JDS evi- dently is willing to consider either a standard short-term con- struction loan or a construction/permanent loan.
JDS plans to construct two residential towers facing the East River along the FDR Drive, between East 35th and East 36th Streets. The company acquired the site a few months ago from New York developer Sheldon Solow for $172.5 million. There’s been talk that JDS, headed by Michael Stern, is also making a play for adjacent parcels owned by Solow.
The buildings, with 40 and 49 floors, will encompass 874,000 square feet and will be connected by a “sky bridge.” Construc- tion, which has already begun, is slated to be completed in
2016. The loan-to-cost ratio is about 75%, pegging the total cost of the project at just over $600 million.
The developer is setting aside 20% of the units as affordable housing to qualify for tax breaks. The rest of the apartments will carry market rents. The complex’s amenities will include a pool, a rooftop deck and a fitness center.
Meanwhile, JDS and a partner plan to build a Midtown Man- hattan skyscraper with a hotel and apartments at 105-107 West
57th Street, between Sixth and Seventh Avenues. Last month, the JDS partnership acquired the adjacent Steinway Hall build- ing, at 109-113 West 57th Street, for $46 million. That gave it air rights that can used to expand the skyscraper’s planned height to more than 900 feet from 700 feet. In conjunction with the 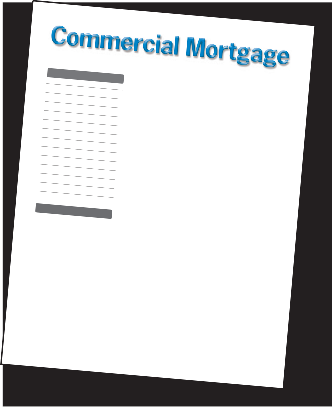 Building has begun on two 800-unit high end luxury condos on the east side of Manhattan.

High­Rises to Replace an East Side

A brief article last Sunday with the Big Deal column about the increasing number of developers who are pursuing luxury rental buildings, using information from the institutional investor Invesco, misidentified the street where one of its developments, Instrata NoMad, will be located. It is East 29th Street, not East 44th.

Increasing numbers of developers are pursuing luxury rental buildings like JDS Development’s new towers under way at 616 First Avenue. The concept is especially popular in up­and­coming neighborhoods, where it is often easier to attract rental tenants than condo buyers.

Developers have been encouraged to pursue the trend by the success of buildings like the Related Company’s MiMA on the Far West Side and Forest City Ratner’s 8 Spruce Street in the financial district.

Now joining the party is the institutional investor Invesco, which is rolling out a luxury rental brand in New York. Known as Instrata, it will be applied to several of the company’s rental products here, including Mercedes House on the Far West Side. That building, on West 54th Street, was originally built as a rental with condominiums on the upper floors. Invesco bought the condominium portion earlier this year, and will rebrand

those top 11 floors, or 162 units, as rental units and name them Strata at Mercedes House.

“Instrata is going to be our strictly luxury assets in New York,” said Michael Kirby, a managing director at Invesco Real Estate. To be included in the brand, buildings must

have condominium­level finishes and offer plenty of amenities. The landlord will offer free concierge service to all tenants of Instrata buildings, he added.

Other properties being similarly repurposed include the former Madison Belvedere on East 29th Street, to be known as Instrata NoMad; the Elektra on Third Avenue, now called Instrata Gramercy; and 75 Clinton Street, to be renamed Instrata Brooklyn Heights. Some of the buildings were conceived as condos; those built as rentals will be retrofitted with higher­end finishes or additional amenities.

“Over the past several years,” said Rob Neiffer, a director at Invesco Real Estate, “there has been an influx in the number of high­end rentals. Before that, anyone who wanted to rent in a luxury building had to go to a condominium, so we identified this void in the market and are hoping to fill it.”

A version of this article appears in print on August 4, 2013, on page RE1 of the New York edition with the headline: In Place of an Eyesore.