Commercial and industrial (C&I) loan portfolios are often overlooked when considering assets for disposition via the secondary loan market.  The more liquid nature of real estate debt versus C&I often results in lenders first considering disposition of these assets when making portfolio management decisions. Despite this, C&I loans secured by business assets and/or business real estate, should be high on lender’s list when considering asset sales due to demand by other banks (for performing or re-performing) and investors (for troubled or non-performing).

Per the FDIC, C&I lending has grown over the past several years, reaching an apex of $1.936 trillion dollars as of year-end 2016. 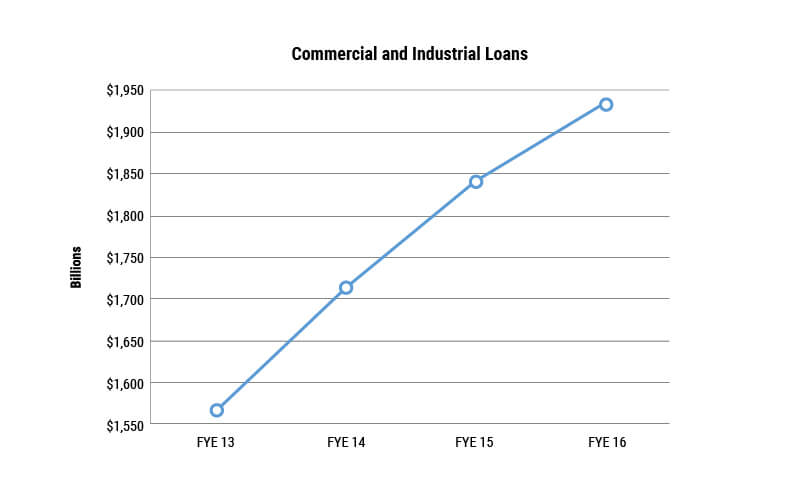 While much of this growth is the result of new businesses seeking capital, loan growth can also be attributed to lenders diversifying away from real estate and construction lending often at the direction of regulators. Some of this increase in loan growth can result in borrowers becoming over-levered, having taken advantage of easier money and loosening credit standards.

Since the end of 2016, the pace of loan growth has abated, with negative growth observed during 11 of the past 17 weeks according to Federal Reserve data.  Furthermore, delinquencies in the C&I space are rising, with the number of delinquencies growing every quarter since 4Q14. The FDIC reports that 1.56% of C&I loans are currently past due or on non-accrual (see below chart).  According to BankRegData.com, in 4Q16, there were approximately $26.6bn of non-performing C&I loans, which represented 19.84% of all non-performing loans. 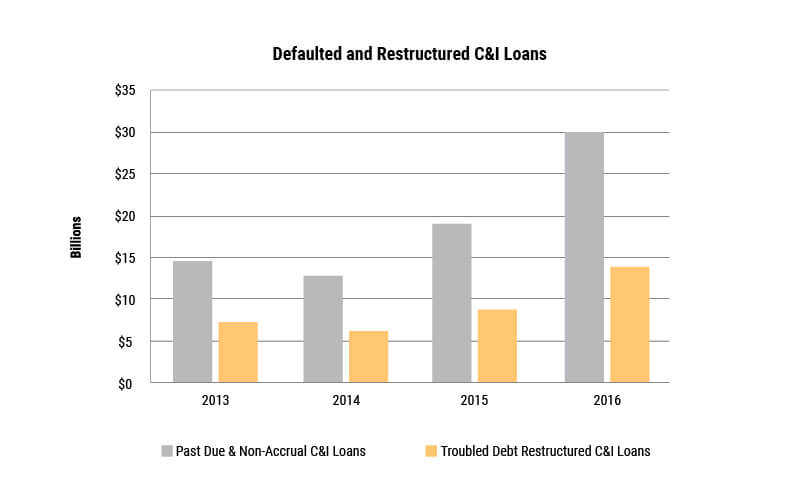 The increase in delinquencies is largely attributable to challenges within the energy sector, as readily observed at a regional level among banks with exposure to markets that derive an outsized amount of economic activity from oil and gas exploration. Additional delinquencies are likely to be observed due to macro-economic factors in the coming months. C&I loans not secured by fixed assets are frequently pegged to variable rates. As indices rise in response to anticipated Fed rate hikes, borrowers may breach debt service covenants, or find themselves in payment default, should they fail to grow revenue in tandem with increased interest expense.

Banks have responded to increased delinquencies by building reserves and increasing their loan-loss provisions by approximately $3.6bn in 2016.  At the same time, credit focused hedge funds / investment funds, merchant capital firms that specialize in providing working capital to small and middle market companies, value investment credit firms, global private equity firms, and opportunistic regional banks have raised funds to take advantage of market dislocation. Many of these investors have a penchant for assisting borrowers facing difficulty making good on their credit obligations by restructuring loans in tandem with providing additional “rescue” capital, accounting and other financial support, and general business guidance. In doing so, these investors are able to resuscitate companies that might otherwise suffocate under the burden of mounting debts.  This additional capital allows investors to offer compelling bids relative to the typical recovery experienced by lenders. A study conducted by the FDIC indicated that loss given default experienced by failed banks averaged 45.5% for C&I loans on a weighted average basis, significantly higher than losses associated with CRE loans, because of a myriad of operating company issues (difficulty paying vendors, obtaining raw materials, distributing inventory, making payroll) which result in a massive decline in enterprise value.

By way of example, Mission Capital recently traded a sub-performing C&I loan secured by the business assets of a home goods supplier whose credit had been frozen, resulting in difficulty obtaining raw materials and in turn constraining production of finished goods. The prognosis for this company was bleak in the face of declining revenue which would have further impaired an already struggling business. Mission created a market for the debt, generating multiple bids in a competitive process. Ultimately the loan traded to a buyer with a penchant for restructuring small business debt at a price that resulted in a gain on the lender’s book value.

At a time when lending activity is slowing, lenders may find themselves playing a game of “hot potato” with classified assets as borrowers struggle to refinance debt in the face of declining lending appetite and tightening credit standards. This, in tandem with increased delinquencies, creates an environment where high loss severities associated with C&I loans are likely to be realized.  In the face of headwinds in the C&I lending space, now is an optimal time for lenders to evaluate their C&I assets to determine if a loan sale is a viable and potentially optimal method of portfolio management.

AVG Partners, which owns the UBS Center in Stamford, Conn., has purchased the defaulted CMBS loan against the 682,327-square-foot property. The Beverly Hills, Calif., investor, which specializes in properties that are triple-net leased to their tenants, paid $54.2 million for the loan, which was securitized through LB-UBS Commercial Mortgage Trust, 2004-C1. The loan’s sale was orchestrated by Mission Capital Advisors. 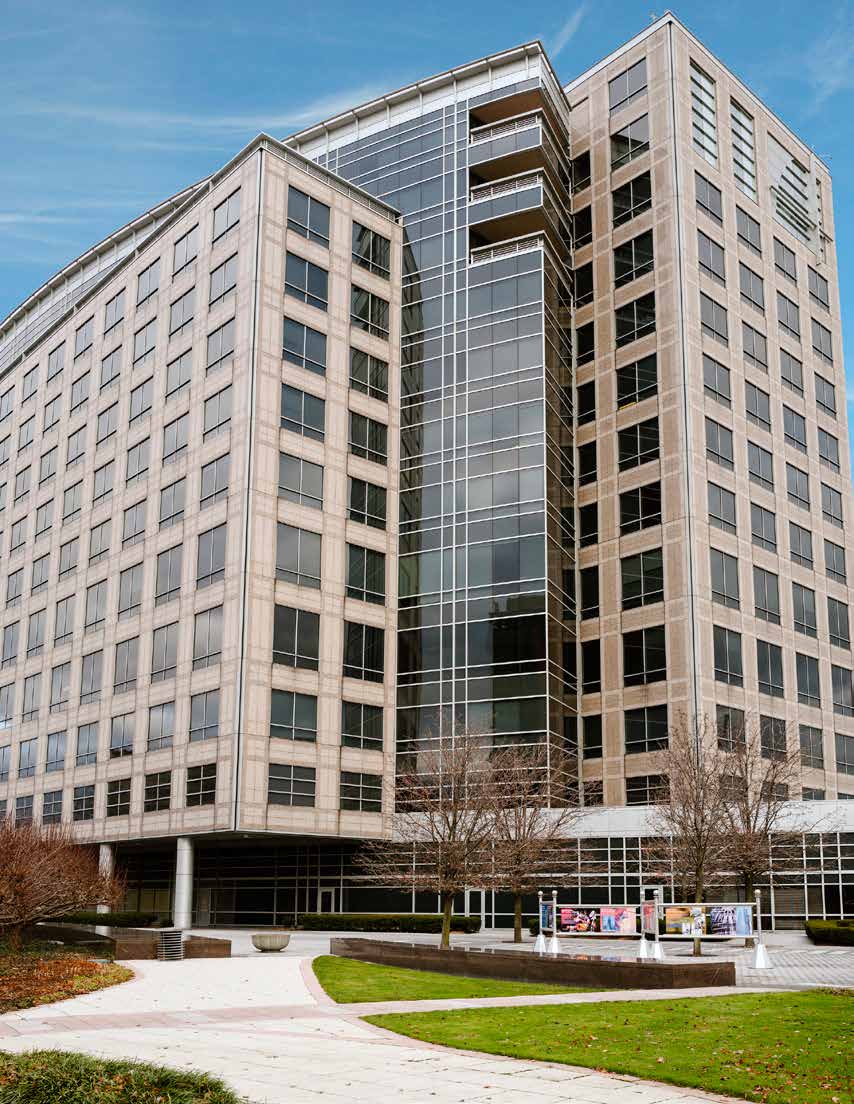 AVG Partners, which owns the UBS Center in Stamford, Conn., has purchased the defaulted CMBS loan against the 682,327-square-foot property.

The Beverly Hills, Calif., investor, which specializes in properties that are triple-net leased to their tenants, paid $54.2 million for the loan, which was securitized through LB-UBS Commercial Mortgage Trust, 2004-C1.

The loan’s sale was orchestrated by Mission Capital Advisors, which declined to comment on the transaction.

The loan originally had a balance of $229.7 million and was provided in 2004 to facilitate Eaton Vance Management’s $243 million purchase of the property at 677 Washington Blvd. The property was subject to a ground lease with UBS. It’s not known whether that lease has been restructured. At the time, the complex was fully occupied by UBS Investment Bank under a triple-net lease that was to run through this December.

The property was constructed in 1997 and expanded four years later. It includes a 13-story office building, a three-story building occupied by daycare and fitness centers and an eight-story building that houses a 103,000-sf trading floor – the world’s largest, and big enough to hold 22 full-sized basketball courts. Eaton Vance in recent years sold the property to AVG.

After the financial crisis, UBS decided that it no longer needed as much space as it was occupying at the property. So it gradually started reducing its footprint, all the while paying rent on the space it leased. Two years ago, it signed a lease for 120,000 sf at the nearby 600 Washington Blvd., which previously served as the U.S. headquarters for Royal Bank of Scotland.

Soon after, the loan, which had been amortizing on a 23.75-year schedule, was transferred to specialservicer CWCapital Asset Management. Early this year, the collateral property was appraised at a value of only $44.4 million . Even though UBS’ lease ran through the end of this year, its agreement allowed it to cease paying rent 14 months before its maturity.

So, it was surprising that the loan attracted such a high offer. And the buzz is that AVG wasn’t the only bidder. Mission Capital took two rounds of offers and is said to have received interest from a number of local investors. Prodding them were the prospects for state and local incentives for businesses to locate in the state.

Nonetheless, the Stamford office market remains hobbled. Its overall vacancy rate is 27 percent, according to Reis Inc. The silver lining, however, is that no space is projected to come online in the coming years. So absorption, which has been negative for years, should turn around. Reis projects that the city’s vacancy rate ought to improve to less than 22 percent within three years. And rents are expected to climb by more than 15 percent in that time.

Meanwhile, the CMBS trust that held the loan suffered a $100.4 million loss as a result of the sale. That’s after taking into account $9.1 million of liquidation expenses.

Wells Fargo Securities, which highlighted the loss this morning in a CMBS Recon alert, noted that one other loan in the LBUBS 2004-C1 trust had liquidated in the most recent reporting period, resulting in losses totaling $116.5 million. That means the deal so far has suffered losses of 10.5 percent, which Wells noted was the largest loss for any 2004 CMBS deal. Transactions securitized in that year have suffered an average loss of 3.5 percent.

The $54.2 million price paid for the UBS Center loan would value the collateral property, without taking into account the price that AVG previously had paid, at just less than $80/sf. That compares with the $70/sf price that Building & Land Technology two years ago had paid for 1 Elmcroft Road, an empty 550,000-sf office property, also in Stamford, that previously was fully occupied by Pitney Bowes Inc.

It bought the property for $50/sf in 2012, when it was completely vacant. It subsequently embarked on a massive turnaround. The property, now two interconnected buildings, currently is nearly half full and will get closer to being fully occupied when Henkel Corp. takes the 155,000 sf it recently leased. The home-care products company is relocating its U.S. headquarters from Scottsdale, Ariz., and got $20 million in state aid to do so.

Mission Capital’s Jillian Mariutti speaks with Connect Media about what the biggest surprise that New York real estate has given in the last six months.

Be sure to join Jillian and Connect Media at their Connect NY Next Generation event on May 17th at The Flatiron Room. [Event Details]